Terri White is Editor-in-Chief of Bauer Media’s flagship film and entertainment brand, Empire. White is an award-winning editor with sixteen years’ experience working for publishing companies on both sides of the Atlantic. She joined Bauer from Time Out New York where she worked as Editor-in-Chief, overseeing the brand’s editorial direction and content across all platforms. Previously, White was Editor of men’s freemium title ShortList and Buzz, the magazine distributed with The Sun. She has also written for Q, Red, Elle, The Pool, Grazia and The Observer magazine. White was named one of Folio’s Top Women in US Media, 2015, BSME’s Men’s Magazine of the Year and PTC’s New Editor of the Year. 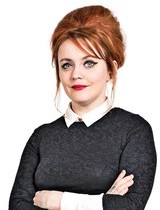