Clare Binns has worked in the film industry for 40 years. She began her career as an usher and projectionist, then she worked her way up to running the Ritzy Cinema in Brixton and
operating a network of cinemas across the UK under the banner Zoo Cinemas.

These included the Gate, Notting Hill and the Cameo in Edinburgh. Clare joined Picturehouse in March 2003.
She has programmed among others the Everyman circuit, including the iconic Screen on the Green, the Curzon Soho and the Electric, Notting Hill.

She is now Joint Managing Director of Picturehouse and is involved in all aspects of growing and running the most innovative and successful neighbourhood cinema group in the UK.

Part of her role is running Picturehouse Entertainment and she was responsible for buying amongst others THE IMPOSTER, CAVE OF FORGOTTEN DREAMS and THE LOBSTER, as well as recent hits GOD'S OWN COUNTRY,THE PARTY and THE WIFE. 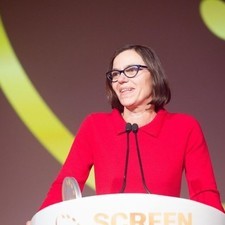