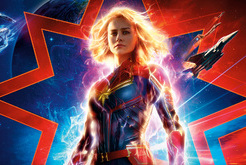 Set in the 1990s, Marvel Studios' Captain Marvel is an all-new adventure from a previously unseen period in the history of the Marvel Cinematic Universe (MCU) that follows the journey of Carol Danvers as she becomes one of the universe's most powerful heroes.

The first reviews to the film are out and it looks like MCU is in line for another superhero hit!

We hope to see you there!

What You'll Learn from This Session...