Geoffrey Colon is a compelling voice at the intersection of marketing, tech, media and popular culture. He is Head of Brand Studio at Microsoft Advertising, where he develops innovative concepts as a form of business development and collaboration with partners. He has written for The Futurist, Advertising Age, and Fast Company, and been quoted in Forbes, Billboard Magazine, The Huffington Post, The Guardian and The Los Angeles Times. He has also appeared on Marketplace on NPR, NASDAQ Live, WABC-AM and Cheddar TV.

Colon is author of the 2016 book Disruptive Marketing: What Growth Hackers, Data Punks, and Other Hybrid Thinkers Can Teach Us About Navigating the New Normal (HarperCollins).

Prior to joining Microsoft in 2013, Geoffrey was vice president of digital strategy at Ogilvy & Mather in New York City.

He is a graduate of Lehigh University with a Bachelor of Arts degree in Journalism and Mass Communication.

Colon initially got his start in the music industry working for Sony Music and later Richard Branson’s startup V2 Music.

Geoffrey has developed projects for AR, voice and video. He is host of the weekly top 100 ranked business news podcast Disruptive FM, daily Amazon Echo and Cortana skill Insights with Microsoft and regularly writes for Branding Strategy Insider. He is an avid speaker on the global marketing conference circuit. 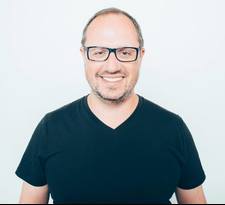 Goodbye to Humanity, The Future Is Artificial & Virtual