Couric joined Yahoo in November 2013 as Global News Anchor, where she reports on live world events, covers breaking news, anchors groundbreaking interviews with major newsmakers and cultural figures, and hosts the digital video series: Cities Rising: Rebuilding America, World 3.0 and Now I Get It. Couric is also the executive producer of the documentaries: Fed Up, which looks at the obesity epidemic, and Under the Gun, which traces the history of gun violence in America, and the upcoming documentary, Gender Revolution, that explores the science and culture about gender.

In September 2006, Couric became the first woman at the helm of an evening news cast when she became solo anchor of the CBS Evening News. Couric joined CBS News after a 15-year run as co-anchor of NBC’s Today Show.

Couric is a co-founder of Stand Up To Cancer (SU2C) and the National Colorectal Cancer Research Alliance (NCCRA), programs of the Entertainment Industry Foundation (EIF). Over $370 million has been pledged to SU2C in support of scientific Dream Teams that tackle a myriad of cancers in collaborative and innovative ways. Couric also spearheaded the establishment of the Jay Monahan Center for Gastrointestinal Health at NewYork-Presbyterian / Weill Cornell Medical Center.

Born in Arlington, Virginia, Couric graduated with honors from the University of Virginia in 1979 with a bachelor’s degree in English and a focus on American Studies. 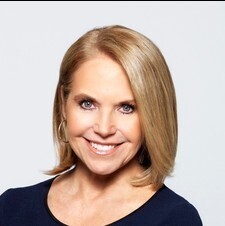