Jyumpei Makino (Vocal) / Taiyo Doki (Guitar) / Riyo Kurose (Bass) / Mika Shimizu (Keyboard) / Seiji Maruya (Drums)
On 2012, Jyumpei Makino (Vo.) formed the band in Ube,Yamaguchi.
The band moved its base to Fukuoka, and current members joined the group.
On July 13th 2016, “LIVING ROOM EP” was released from a major label.
On October 26th 2016, “a.k.a” was released as their 1st album. The band has performed at events such as SUMMER SONIC and shared stages with bands from abroad, such as MEW and POP ETC.Their guitarist Taiyo Doki, has written a song for Denpa Gumi.inc and worked with YUZU as a sound arranger.
On 2016, Apple Music has selected LILI LIMIT on the “NEW ARTIST SPOTLIGHT,” a list that introduces hottest artists. SPACE SHOWER TV has selected them for “SPACE SHOWER NEW FORCE,” a new project that supports uprising talented acts.
On 2017, a music video of “A Short Film” from their 1st album, “a.k.a,” was nominated as one of the 16 films for Best Music Video of the Year on Short Short Film Festival 2017. 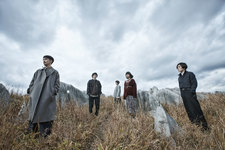