1997, founded Hayashi was longing to New Wave band "DEVO" of the United States at the time of high school students.
Origin of the band name, from synthesizer "POLYSIX" of KORG. And specificity performance in addition to the wacky dressed that visor to everyone matching jumpsuit, suddenly attention in the one and only sound the computer music were fused, such as roaring guitars and synths and vocoder. Indie debut album "1st P" in 1999. Major debut from Kuhn record in the maxi-single "XCT" in 2000.
In 2003, he released the "NEU" in the United States full-scale activities overseas.
Constant to make the tour every year, the total number of overseas live 250 or more. It performs a live of more than 100 per year to meet domestic and foreign, also increases awareness. March 2010, to commemorate the major debut 10th anniversary, held his first one-man live at Nippon Budokan. With this live Vo., Synthesizer of Cayo graduation, the band enters the hiatus.
In August 2010, the GRASS STAGE of ROCK IN JAPAN FESTIVAL 2010,
emerged as POLYSICS of three systems of Hayashi, Fumi Yano. A new start for.
2012 March 3, welcomed the live total 1000 th at the one-man live at SHIBUYA-AX,
is a one-man live in the following March 4, celebrated its 15th anniversary.
2015 to 2 days in the live of playing 100 songs in a single day ,become a hot topic in live shook off.
March 2017, celebrated its 20th anniversary at a one-man live , which was held at the Toyosu PIT. Was held in October 14, TSUTAYA O-EAST 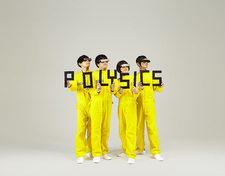