Pearl Servat is the Head of Brand Marketing at Visible, the first all-digital wireless carrier in the US. In her role, she oversees all aspects of communications, brand, creative, influencer marketing, social, partnerships, and impact for the company. Visible has been named to Fast Company’s Most Innovative Companies list (2020), Adweek’s Brand Challenger series as Best Telecom Brand (2021), and secured a nomination for the 2020 Cannes Lions Awards.

Prior to joining Visible, Pearl led marketing, digital, and communications at Philymack, the leading talent management and production company, with a portfolio of investments in its fold. During her tenure at the Roc Nation and Live Nation-backed company, she oversaw all partnerships and global marketing efforts for artists including Demi Lovato, Nick Jonas, and the Jonas Brothers, among others. As a trusted advisor to Philymack’s CEO, Pearl led the company to a number of “firsts.” She facilitated Demi Lovato’s appearance at the 2016 DNC, and led various projects and initiatives both within and beyond the music industry. These included Lovato’s collaboration with the prestigious UCLA Semel Institute, as well as defining Demi’s role as Global Citizen’s first ever Global Ambassador of Mental Health, for which Pearl developed a custom program in the Middle East. Furthermore, Pearl solidified numerous lucrative partnership deals with global partners including Lyft, Mastercard, and Spotify, among others, and led the global campaign for one of YouTube’s top 5 Originals to date.

Prior to Philymack, Pearl spent over 10 years at global marketing and communications firm, PMK*BNC. During her tenure, she represented internationally recognizable names including Jane Fonda, Al Pacino, Ariana Grande, the Kardashian family, the creators of the Simpsons, Lea Michele, and a number of other notable names in film, TV, and music. She also led Youtube’s first-ever global, and award-winning, creator campaign with Bethany Mota. Furthermore, she facilitated and managed strategies for a number of brand and philanthropic partnerships for clients, including those with UNICEF, GCAPP (Georgia Campaign for Adolescent Power & Potential), Chopard, L’oreal, and No Kid Hungry.

A native of Tehran, Iran, Pearl is also a steadfast champion for empowerment and mentorship. She has supported the Children’s Hospital Los Angeles in various ways for over 15 years, and is currently attending the MBA program at the University of North Carolina, Chapel Hill. 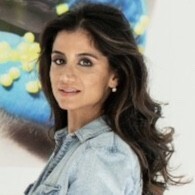 The Power of Authentic Brand Partnerships