Bakish oversees one of the world’s leading producers of media and entertainment content, driven by a global portfolio of powerful consumer brands, including CBS, Showtime Networks, Paramount Pictures, Nickelodeon, MTV, Comedy Central, BET, Paramount+, Pluto TV and Simon & Schuster, among others. In this role, which he assumed in December 2019, Bakish is responsible for growing the company’s creative assets and capabilities to serve important and diverse audiences in more than 180 countries.

Prior to the recombination of Viacom and CBS, Bakish was the President and Chief Executive Officer of Viacom since December 2016. He led the revitalization and evolution of Viacom’s core businesses, returning the company to growth, and extending its leadership across multiplatform entertainment content, next-generation distribution and advertising. Through a strategy to deepen and expand Viacom’s presence in digital and live experiences, Bakish also stewarded the key acquisitions of free streaming television service Pluto TV; Gen-Z focused brand Awesomeness; influencer marketing firm WHOSAY; and VidCon, the world’s largest celebration of online video fans and creators.

Bakish previously headed the company’s international business as President and CEO of Viacom International Media Networks (VIMN) since 2007. Under his leadership, VIMN more than doubled revenues and broadened its portfolio with new, broadly distributed pay-TV networks, including Spike and the Paramount Channel, as well as major broadcast networks Channel 5 in the U.K., Telefe in Argentina and Colors in India. At the same time, he guided the company to launch Viacom Play Plex and other innovative mobile streaming offerings that introduced a new generation of young audiences to Viacom’s popular brands and IP.

Bakish joined Viacom in 1997, and held a series of senior corporate, sales and development positions at the company. He previously worked as a partner with Booz Allen & Hamilton in its Media and Entertainment practice.

Bakish has an M.B.A. from Columbia Business School and a B.S. in Operations Research from Columbia’s School of Engineering and Applied Science. He serves on the boards of both schools and is also a Director on the Board of AVID Technologies, a NASDAQ-listed company. 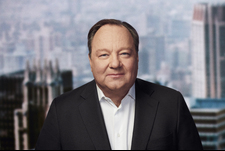 The Future of Entertainment in the New Creator Economy