As Senior Vice President, Hennessy, Jasmin leverages her strategic marketing and brand leadership skills as well as her extensive industry network to drive growth for MHUSA’s largest business. Jasmin spearheads execution and programming to expand the brand’s consumer base and convert existing customers to more elevated expressions of the brand. She is the first black woman to serve as Senior Vice President in the company.

Most recently, Jasmin served as Vice President, Brand Marketing, Hennessy and Vice President, Moët & Chandon. In these roles, she was responsible for developing and directing strategic brand plans to maximize image, brand equity, and profitability.

Jasmin began her career at The Coca-Cola Company in brand management roles for the Coca-Cola, Coke Zero and DASANI brands. She then transitioned to entertainment marketing, delivering business-critical partnerships with American Idol, The Oscars, and American Music Awards, among others. After seven years with The Coca-Cola Company, Jasmin moved to T-Mobile to lead their Entertainment Marketing efforts. While there, she led the naming rights sponsorship of T-Mobile Arena in Las Vegas; created the company’s first-ever entertainment marketing strategy; and led celebrity partnership programs that drove incremental subscriber growth for the brand.

Jasmin is also heavily involved in mentorship and has been a strong advocate of improving diversity at MHUSA.  She is a member of the Moët Hennessy Global Diversity, Equity and Inclusion Council and serves on the Steering committee. Additionally, she was instrumental in the development of the Black Employee Resource Group, which is committed to helping educate the company and putting action against DEI goals. Jasmin is also very involved with Odyssey where she has participated on panels and developmental coaching sessions where she’s able to provide her insight and guidance. Jasmin is committed to supporting charitable causes, and is a proud member of the Marketing Advisory Council for AMERICARES, a non-profit organization committed to providing quality medical aid, disaster relief and recovery during natural disasters, civil war and in areas where poverty and disease is severe. In this role, Jasmin and other cross-industry marketing leaders advise the AMERICARES CMO on ways to promote the AMERICARES mission and increase awareness and followership.

Jasmin enjoys collecting art, reading and traveling. She has a BS from the McIntire School of Commerce at the University of Virginia, and an MBA from the Fuqua School of Business at Duke University. 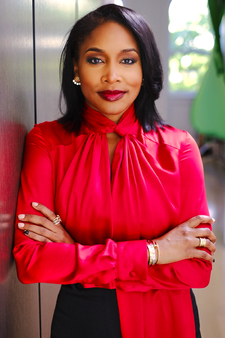