Bonin Bough is one of the foremost-awarded marketing executives in his field, the host of CNBC’s Cleveland Hustles, and the author of Txt Me (646) 759-1837.

His illustrious career led him to becoming one of the youngest C-suite executives in a Fortune 50 company. Having served as the Chief Media & eCommerce Officer at Mondelēz International (formerly Kraft Foods) for four years, Bough created some of the first marketing programs across Facebook, Twitter, YouTube, Paramount Films, ABC, NBC, Fox, to name a few, and takes precedence in fostering partnerships with startups including Instagram, Foursquare, and Buzzfeed. Bough was also responsible for spear-heading some of the industry’s largest global marketing campaigns across all-media including the premier of the first ever 3D printed food product, the customizable, real-time 3D printed Oreo at South by Southwest.

Bough is seen as one of the top mobile marketers in the world, having been named “Mobile Marketer of the Year” by the MMA and entered the American Advertising Hall of Fame in 2015. 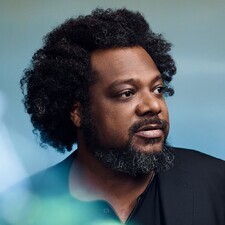 A Fireside Chat with Group Black: Transforming the Face of Media Ownership and Investment