Amy, co-host of The Bobby Bones Show, did not plan on a career in radio. After finishing college at Texas A&M University, the Austin native started a career in sales, but randomly landed a job in radio after she met Bobby Bones at a restaurant. In 2006, she joined Bones as co-host of The Bobby Bones Show in Austin, Texas, where the program broadcasted weekday mornings on 96.7 KISS FM. The program attracted listeners in droves, as well as top rankings in the market. For their work, Austin’s Alliance of Women in Media honored The Bobby Bones Show with their “Radio Personality of the Year” award seven years in a row, in addition to winning the “Austin Radio Personality of the Year” award in 2009, 2010 and 2011.

The Bobby Bones Show joined Premiere Networks’ national lineup in 2011 and was nationally syndicated on CHR radio until February 2013, when the program transitioned to a Country format. Today, the program originates from WSIX in Nashville and can be heard on more than 100 Country radio stations nationwide by millions of listeners. In addition to the weekday program, Amy co-hosts a weekend Country countdown with Bones and Lunchbox -- Country Top 30 with Bobby Bones, a four-hour music program, airs nationwide and features the trio as they showcase the top Country songs and go beyond the music to share conversations with the artists. Amy and the cast recently received their third ACM Award for “National On-Air Personality of the Year” (2018, 2016 and 2014) following a 2017 CMA Award in the same category. In 2014, Amy was honored by the Alliance of Women in Media with their annual Gracie Award for “Outstanding Individual Achievement – Morning/Afternoon Drive Personality.”

Amy and the entire morning show crew has a passion for community service, which is evident in the radio programs. Supporting numerous public service and charity organizations, they encourage their audience to do the same in emotional, rewarding and often wildly entertaining ways. To date, The Bobby Bones Show has raised nearly $8 million for St. Jude Children’s Research Hospital and is involved in numerous other charities and initiatives including Outnumber Hunger, City of Hope, TJ Martell Foundation, American Red Cross, Second Harvest, and various animal related-organizations such as Austin Pets Alive and the Nashville Humane Association.

Perhaps one of their most popular charity initiatives, #PimpinJoy is a movement promoting random acts of joy. It was first launched in 2013 to honor Amy’s mother Judy, who had been battling Cancer for two years. Throughout their struggle, both women made a conscious effort to not let hardship or difficulty cause them to lose hope or positivity in their lives - instead, they choose to be happy, pass on joy, and influence others to do the same. Growing rapidly and garnering national attention, the movement spurred the launch of a #PimpinJoy clothing line, which supports various charities, and an annual week-long celebration known as Joy Week. Luke Bryan, Garth Brooks, Jake Owen, Keith Urban, Darius Rucker and Sam Hunt are just a few of the major country stars who have participated in Joy Week by performing live on the show.

In 2013, Amy and Bones also created 30 Abes, a campaign and event to raise funds and bring awareness to international hunger. On September 28 of that year, The Bobby Bones Show, in partnership TEEMHaiti and international hunger relief organization Numana, gathered with more than 2,000 volunteers at Nashville Municipal Auditorium for the 30 Abes food packing event benefitting the Maison Des Enfants De Dieu orphanage in Port-au-Prince, Haiti. Packaging a total of 530,064 meals in less than an hour, they set a new Guinness World Record for “most hunger relief meals packaged in one hour” by a team. Today, 30 Abes extends its reach to focus on other charitable causes.

In 2016, Amy began hosting the popular Love What Matters podcast, a weekly program highlighting the best content from the #LoveWhatMatters community. Available on iTunes, iHeartRadio, TuneIn, Google Play and Stitcher, Amy shares inspiring stories about people celebrating the moments in life that matter.
--more--
Page 2 of 2

In January 2017, Amy added hosting duties for CMT’s Nashchat, a social interactive companion to the hit country music drama Nashville. The Facebook Live chat originates from a living room in Nashville, and features cast and crew interviews, original music, and Nashville insiders and fans recapping each new episode just after the show ends.

Outside the studio, Amy is passionate about working with orphans in the U.S., Africa and Haiti, where she recently adopted two young children. Her husband is a pilot who spent 12 years in the Air Force, so she’s also active in supporting the men and women who serve our country. 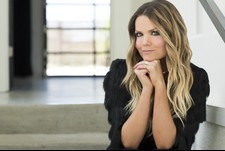 An America Divided: Are We Listening?