Monica Halpert is the Chief Marketing Officer of Sundance Institute overseeing all aspects of the Institute's marketing, branding and communications efforts. Putting her longtime obsession with consumer behavior, popular culture and storytelling to work, she has devoted most of her career to branding entertainment and media businesses including VH1, Marvel Entertainment, ESPN, ABC Family, E! Entertainment Television and Sony International. As the CMO-in-Residence for NBC/Universal, Monica spearheaded turnarounds of Telemundo Media and Style Network as well as the relaunch of the company’s premier digital properties. Previously, she served as the CMO and Editorial Chief of Bluefly.com, where she was instrumental in elevating one of the earliest players in e-commerce retail into a rich media destination for its relentlessly loyal audience base. Monica speaks fluent French, Spanish, Italian and Hungarian, and can wing it in German and Portuguese. These days, she resides mostly in LA, where she is rarely seen without white sunglasses on her head. 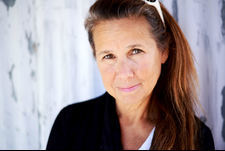 THE REBOUND: Recovering From Failure